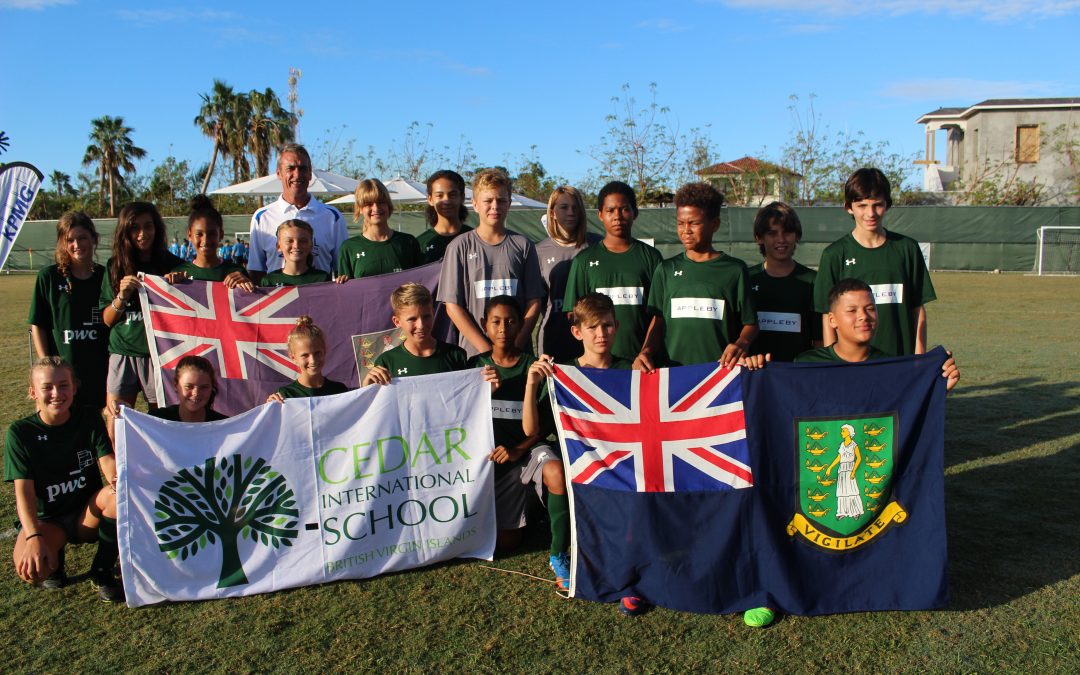 Cedar International School’s elite football playing students headed off to the Bahamas yesterday morning as they attempt to better last year’s stellar results from the KPMG Football Fest at Lyford Cay International School. The tournament is geared towards children aged 13 and under and this year sees 19 participants from Grade 6, 7 and 8 make the journey.

The players began their preparation in early September during extremely competitive tryouts. With teams picked, the training continued for 8 gruelling weeks including early morning, after school and Saturday morning sessions at Sea Cows Bay.

Head Coach and UEFA A certificate holder John Reilly saw tremendous progress and commitment from all the players this year and is eager to see them put their training to the test in Bahamas. John’s coaching staff – Alessandro Palladino, Peter Van Zoost and Walter Reich agreed with John Reilly’s assessment. “To see the progress of the Cedar football program is exciting” remarked Walter Reich. “We have now attended the tournament for over 5 years and the improvement in quality each and every year is great to see. From only being able to field one team during the first few tournaments with no tryouts to what we are doing now is a true testament to the progress made.”

This year sees tournament veterans Luca Reich, Lawton Green and RJ Williams playing in their last year of eligibility in the boys U13 team. Both Lawton and Luca are playing in their 3rd tourney. “It will be interesting to see how they perform as they complete their transitions from wide eyed youngsters to more experienced, confident 13 yr olds – in the past they were always smaller and slower due to their size. While they were always on par with the opposition with their technical skills it will be interesting to see how they perform on the pitch now that they are also physically bigger and faster” noted Alessandro Palladino.

Joining the three Grade 8s are Grade 7 students Luka Chalwell, Michael Palladino, Nathan Haycraft, Scott Kirk, Jesse Cook and Alejandro Santos. All of the Grade 7s excluding Michael Palladino, who was not at Cedar last year are making their second visit to the KPMG sponsored tournament. “With the experience of last year under their belts, a year of good quality training and the addition of Michael Palladino who oozes football quality, it will be interesting to see if the Grade 7 class can, together with the Grade 8s better last year’s 3rd place result in the boys side of the draw.

For the girls, Tola Broderick, Tinia Van Zoost, Libby Morris and Alicia Ayers lead a determined squad of girls. 11 year olds Darci Reich, Gabby Jermyn and Arial Mohammed make their second trip to Bahamas while Freya Childs joins her Grade 6 classmates for the first time. Hailey Chomiak and Georgia Jermyn round out the squad in their maiden voyage to the Bahamas.

Coach Peter Van Zoost, on hand for many of the girls’ training sessions noted that the girls are raring to go and have worked hard for the past two months. “The main thing is that the girls believe in themselves” he remarked. “And have the confidence and self-belief to carry out everything they have learned in their trainings sessions”.

Training rounded out last week with sessions with visiting UEFA A certified coach Pat Malone and ex-Liverpool and Irish International football Ronnie Whelan. “Watching Ronnie Whelan show the girls how to kick a ball with power was amazing” remarked Walter Reich. “To hit the ball so hard with seemingly no effort goes to show just how important technique is.”

The KPMG Football Fest is hosted by Lyford Cay International School in the Bahamas, and attracts competitors from around the region including Jamaica, Turks and Caicos, Cayman and the British Virgin Islands.