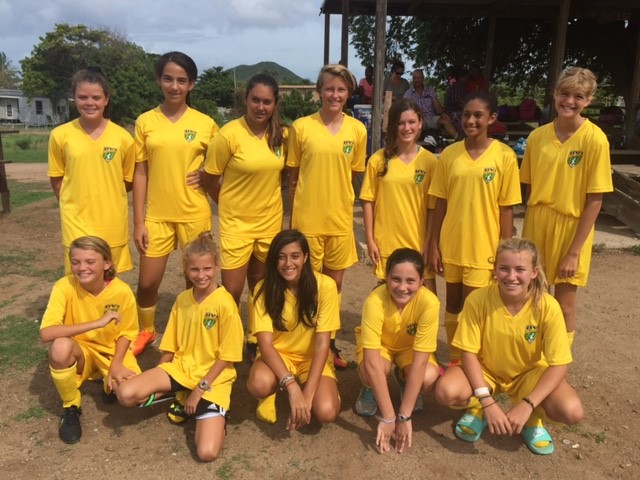 Cedar International School girls packed their bags on Saturday to travel to Virgin Gorda to meet an equally determined Anegada girls football team who had made the crossing over to VG earlier in the morning. Playing at Virgin Gorda’s recreational grounds, the game had a nervous edge to it given it was the first game of the young season for both teams and for Cedar because regular backstopper Libby Morris had not made the journey due to illness. Cedar’s girls were made up of mostly Grade 6s, 7s and 8s coupled with two more senior and seasoned players in Lily Pierce and Olivia Messum. Both Lily and Olivia provided their younger teammates with much needed confidence and the pre-game chat from both Coach John Reilly together with on-field chatter from the senior girls did much to calm everyone’s nerves.

Fresh off their terrific showing in the U13 Lyford Cay – Bahamas tourney, it did not take long for the Grade 6, 7 and 8 girls to shed their early nerves and focus on the game at hand. Implementing a 1-3-5-2 formation, Coach John indicated early on that he wanted his girls to control the mid-field and keep the Anegada girls (renown for their strong and aggressive play) on their heels.

It would be Tinia Van Zoost who would volunteer to play goal keeper for the day in place of Libby. “She has massive boots to replace” remarked one travelling supporter who was sporting Libby Morris’ usual #1 Cedar shirt. Tinia, together with a solid back line of Lily Pierce, Ariel Mohammed, Freya Childs and Georgia Jermyn claimed their first clean sheet of the season through sheer tough determination. “Tinia played good composed football throughout providing good distributions of the ball when she was called upon to make a save” noted one of her fans in the crowd who had made the Sir Francis Drake crossing. Lily, with her wealth of experience, was called upon to play central defender and she organized the back line extremely well. “When she did make her trademark runs up the pitch she was always alert to sprint back to ensure the backline remained compact and organized. Her passing both long and short was accurate and composed as she finished with an impressive 90% passing completion rate” recited one statistician.

“Ariel, making her trademark runs up and down the flanks played a terrific game and really created width on attack for the Cedar team playing 11v11 together for the first time in their young careers” noted Coach John. On the other side of the pitch, Georgia put in a good energetic display of football that disrupted the Anegada team when they did look to create opportunities on that side of the pitch.

It was Darci Reich who would give Cedar team a lead they would not relinquish. Darci finished off an exquisite goal that was full of composure after darting in and out of a few defenders using some trademark roll overs, drag backs, step overs and feints. “I just looked up and saw a spot that would get me a goal if I could hit it” Darci reported during the post-match interviews. “I put my head down and concentrated on making good contact and it went in”.

Olivia Messum played in the midfield where she was asked by Coach John to play strong and physical. She did a great job of providing a good link up between the back line, the wings and the forwards. Tola Broderick, playing beside Olivia in midfield showed off her technical skills and did well to retain possession and provide good positive play up the field. Alisha Ayers, also playing in midfield played terrific throughout and was wonderful at constructing some clever combination play with teammates that were on the same page. “When the game is played in that fashion” explained Coach John “it becomes a much easier game”.

It was young rookie footballer Caren who provided a massive physical presence up front. “Caren’s determination to never given an inch to her opponents provided room for her speedy teammates such as Gabby Jermyn who worked her angles well and was always looking to drive forward into space” noted one scout watching the game. Equally impressive providing physical strength was Freya Childs on defense and Hailey Chomiak. “Their play was extremely important in setting the tone and giving belief to their smaller teammates that this game could be won on the physical side of the equation as well as technical side. Gabriella DeAngelis provided the forward line with a much needed rest and did well in keeping the ball up the pitch to keep the game out of reach for the Anegada team. “Overall a tough but rewarding win” concluded Coach John – “it’s close games like these that build character and provide insight into the toughness and grit of the girls”.